Membership Applications are now being accepted 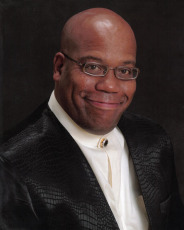 Reach out to Don Cody at cody7777@aol.com for information on joining the Florida Chapter.

Send all historical BIOs to radioprofiles@gmail.com 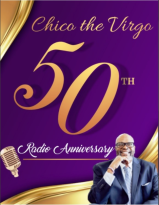 Chico the Virgo.  For the last 50 years, with the help of the Almighty God, millions of people have enjoyed the smooth and mostly funky sounds of Chico the
Virgo. He’s most loved for his rhythmatic rhymes such as “I’ll have you
looking for me in the daylight with a flashlight.” Chico has delivered
number one ratings in morning drive as well as afternoon drive while
serving as music director and program director. He has served the communities of Leon County, Palm Beach County, Broward County and currently Miami-Dade County on the number one station in South Florida, Hot 105 . Chico has also hosted South Florida’s only blues show called Chico Plays the Blues.

Chico has been awarded DJ of the year by Black Radio Exclusive and
Jack the Rapper. Chico also has three Marconi Awards for excellence in radio. Chico never attended broadcasting school but, he has earned a Bachelor of Science degree from Florida Agricultural and Mechanical University. Chico was trained and receive his skill set under the tutelage of the late Charles Merritt (The Mad Hatter). He also stands on the shoulders of the superstars he grew up listening to: Joe Fisher, The Crown Prince, Wild Man Steve, Fred Hanna, Nick with the Solid Kick
and Milton “Butterball” Smith. The greatest pleasure I received throughout this journey is the people and the opportunity to serve those various communities. 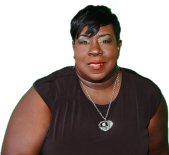 Lynn J. Brown is Owner and CEO of the South Florida Gospel Music Awards founded in 2004; her position as a Board Member later found her title to change to CEO after the passing of Peppi Hendix; the original founder.

Lynn has started the L.A. Jackson School of the Arts; a Christian based music school.  Later, in 2009 she was appointed President of the Broward Alliance; formerly, the Broward Gospel Announcers Guild.  Today, she has been appointed Secretary of the Gospel Music Industry Network.

Five days a week Lynn hosts the Gospel Hot Hitz Show on WOIB 101.9 FM.  Lynn is an ordained Minister and a Stellar and Dove Award Member. 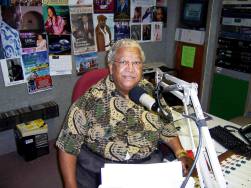 Pastor Shirley.  Under the tutelage of Don DC Cody, Pastor Shirley Watts began hosting Sunday Morning Gospel from 1995-2003 in Gainesville, Florida. When Pastor Shirley would pray for listeners week after week, the testimonies of victory began to permeate the airways and her show soon became #1.
In 1998, Pastor Shirley and Clarence Watts joined in holy matrimony, each having five (5) children.  Later, the Watts-duo formed the Voices of Praize Chorale .

Today, Pastor Shirley continues to preach, pray and host radio programs on multimedia platforms, which can be heard on Praise 1075.com or the app.

James T.  James T. began his radio career in 1969 at Palm Beach Junior College. As a major he participated in a college show that aired on a local top 40 radio station, WIRK-AM. In 1971 he entered the professional ranks as news director and weekend talent at WRBD/WCKO in Ft. Lauderdale. There he developed into a primary on-air talent. That experience, coupled with the exposure of a weekend entertainment/public service talk show on WPTV Channel 5 in West Palm Beach, established him as a major personality in Broward and Palm Beach counties.