Welcome to the Charlotte, N.C. Chapter of the National Black Radio Hall of  Fame

Cheryl Patterson "Chirl Girl" has served as one of North Carolina’s premier broadcast talents for nearly 3 decades. “The Queen of Fun” has had one of the top Midday shows for years on WOSF 105.3 and WBAV V101.9 ranking number one in her daypart.  Chirl Girl's experience covers being heard on Old School 105.3 WOSF, the highest-ranking Urban Adult Contemporary radio station in the Queen City, and on weekdays co-hosting “The Tom Joyner Morning Show” while simultaneously, locally producing “Get Up Mornings with Erica Campbell” on Praise 100.9 WPZS and “The Rickey Smiley Show” on 92.7 The Block, WQNC. In the past, Chirl Girl has had the honor of interviewing President Barack Obama and has worked extensively with V101.9, WBAV, and Steve Harvey, as well as several morning shows on Power 98. Chirl Girl was the 1st African-American to host a show on Charlotte’s #1 County station, WSOC. In addition, she hosts and produces “The Chirl Girl Show” and “The 704 PPC Podcast” on iTunes. The Mid-Day Diva has been honored for her work by NABFEME and BET has recognized Chirl Girl for being a “Black Girl Who Rocks” and most recently, as a “Woman of Excellence” by Radio One. She has served as the Vice President of The Charlotte Chapter of NABFEME and as the Event Host for The Red Pump AIDS/HIV Gala. Chirl Girl currently serves as the Vice President of the American Legion Post 262 Auxiliary. Chirl has been on stage with The Afro American Childrenʼs Theater and The NC Black Repertory Company and is also a proud alumnus of the NC School of the Arts and UNC-Chapel Hill. Chirl Girl has also worked on-air at WSAT and WSTP/WRDX in Salisbury, NC as well as WCHL in Chapel Hill, NC. 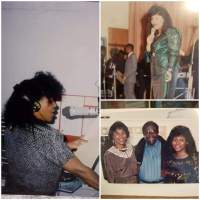