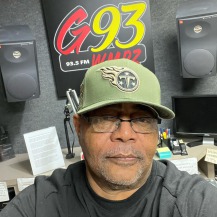 The Tennessee Chapter of the NBRHOF located in the City of Chattanooga!

Chapter President Keith Landecker with Chattanooga stations Power 94 WJTT and G93 WMPZ, in honor of Jackie Robinson Day, wanted you to know about the inaugural Scenic City Diamond Classic that was held in Chattanooga on March 26th. We featured two HBCU baseball teams, Morehouse and Kentucky State facing off at the AT&T Field, home of the Chattanooga Lookouts.

At the game we observed the local RBI baseball and softball player that went on to play at the collegiate level.

We acknowledged the role Jackie Robinson played in breaking the color barrier in Major League Baseball.

We also had a special tribute and recognition to a living legend, a part of the Negro Baseball League, a member of the Chicago American Giants,  Dennis Biddle who was famous for starting a Giants game as a 17 year old pitcher.

Super Bowl Champ Chattanooga's Kareem Orr stopped by the studio to show off the trophy and hang out with his Fam!  #cityofchampions#423

Usher mentions WJTT Power 94 as the first station where he heard himself singing on the radio and also mentions Keith Landecker at 5:36 location on the video below